Sun 15th March 2020 10:35 by Peter Harvey
As far as I can tell from the photo, this looks like Steatoda nobilis, the so-called 'noble false widow', the spider which the media make such an unjustified fuss about. It has been frequent in the southern coastal counties of England for a great many years, and is nowadays frequent and abundant in many areas of southern England and Wales, including the south coast, south-west, south-east, London area and East Anglia, and increasingly much further north. The media frenzy caused by this spider is unwarranted. Steatoda nobilis spiders are unobtrusive, have no interest in attacking humans and would only bite if they were put into a position where they do so as a defensive reaction. They are no greater risk than honey bees and social wasps. There are a number of other 'false widows' in Britain, some which are native or have been in the country for centuries, so there is a lot of misinformation about these spiders.
link
Sat 14th March 2020 12:02 by Alice Waters
Unknown spider in south london
Hi, I saw this spider this morning. 14th March 2020. On Woodside green road, SE25 5EY. Would anyone be able to tell me what kind of spider it is please? The large back was about the size of a 1p or pound coin. 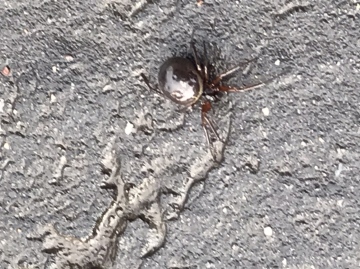 link
Fri 13th March 2020 16:38 by Peter Harvey
These are juvenile Pisaura mirabilis, the 'nursery web spider. The female commonly sits out on leaves, and is very variable. She carries the egg-cocoon in her jaws until the eggs are about to hatch, when she constructs a tent-like web in tall herbage in which young remain until they disperse. The spider is widespread in much of Britain, including in gardens.
link
Wed 11th March 2020 17:32 by Christine Edwards
Curious to know the identification
Hello there,

We seem to have a few of these spiders knocking around our warehouse, I was just curious to know what type of spider they are please? I have no issue sharing my work space with them, but I do like to learn bits about them and I can't seem find this one online. Approx. 1.5 - 2 cm in size but we have a couple of larger and darker ones about the place too. 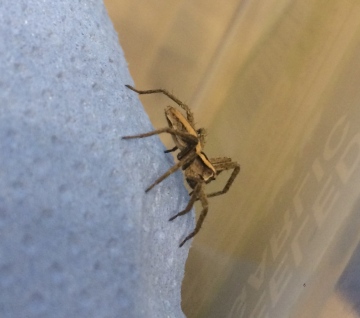 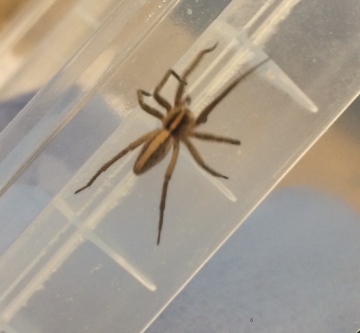