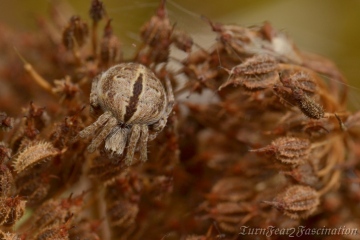 
A Scottish Record of Agalenatea redii (Scopoli, 1763) by Jim McCleary

On 15th June 1996, during a visit to Carsegowan Moss, Wigtownshire (VC. 74) to carry out hydrological monitoring, I found a female orb-web spider different from any I had encountered previously. As I had no collecting equipment with me, I took a photograph of the spider, from which it was tentatively identified as Agalenatea redii (Scopoli, 1763). Four days later, I revisited the Moss, but was unable to find any further members of the species. As Agalenatea's period of maturity is primarily springtime, I decided to search earlier this year and on 20th April 1997 found a single female. A further visit on 30th April produced a male and a female.

Carsegowan Moss is a 50 ha raised bog on an estuarine plain by Wigtown Bay and is both an S.S.S.I. and a Scottish Wildlife Trust Reserve. Its typical peatland vegetation is dominated by Sphagnum spp. (including the uncommon S. pulchrum Warnstorf), Ling (Calluna vulgaris Salisbury) and Cross-leaved Heath (Erica tetralix L.). Bog Rosemary (Andromeda polifolia L.) and Cranberry (Vaccinium oxycoccus L.) are also common. The mire is surrounded by agricultural land, but has a fringe of Birch (Betula pubescens Ehrlich) plus a central planted stand of Scots Pine (Pinus syhestris L.). Some invasion of the mire by Birch and Pine has occurred. Agalenatea redii occurs as far north as Cumbria and is also found in Wales and Northern Ireland (P Merrett, pers. comm.) but apparently had not previously been recorded from Scotland. B.A.S. members made a recording trip to Galloway in August 1989, but Carsegowan Moss was not visited; this would, anyway, have been too late in the year for the species. As the species is found in Cumbria, it is possible that it occurs at other sites in southwest Scotland. A thorough search of Bell's Flowe, a bog in Dumfriesshire close to the border with England, on 25th May 1997, proved unsuccessful. Carsegowan Moss therefore represents the only known site, at present, for Agalenatea redii in Scotland.