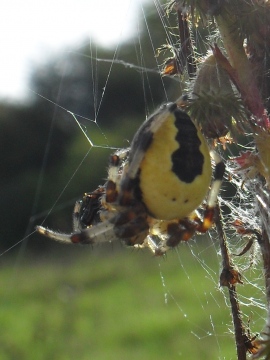 
Found a large one of this species in a hanging basket that was home to petunias, in Stanion, Northants October 2016

Whilst picking blackberries close to my house this autumn I noticed a large orb web amongst the bramble (Rubus fruticosus agg.). The webâ€™s owner turned out to be an Araneus marmoreus var. pyramidatus; further searching in the hedgerow revealed another.

Although the habitat preferences of A. marmoreus never seemed very clear cut to me, I thought woodland edges or bushes on river banks were its usual haunts, and that it had a very patchy distribution. Yet there it was in a hedgerow, a habitat that Suffolk has in abundance. Searches in other hedgerows around my village, Barrow, revealed more. I found its webs amongst several different sorts of plant: wild rose, blackthorn, nettles, and suspended from the lower branches of trees. But bramble held the largest numbers. Itâ€™s not difficult to see why â€“ at its densest it is sturdy, which helps to reduce buffeting of the webs in strong winds, and has dense foliage amongst which the spiders can easily construct a silken retreat. I then searched bramble in the hedgerows in neighbouring parishes (Denham, Hargrave, Ousden) and, again, I found A. marmoreus, mostly the variety pyramidatus but about 20% were of the variety marmoreus. It could often be found living alongside A. diadematus although outside the villages it outnumbered this species. In contrast, within Barrow A. diadematus was very common and A. marmoreus hard to find, though I did find two in the centre of the village, in an extensive bramble hedge running alongside a road.

Now, the countryside hereabouts has a lot of hedgerows, so could A. marmoreus actually be as common as A. diadematus? Well, no. The presence of A. marmoreus within hedgerows seems dependent on bramble being there also. Although some may stray on to other plants, I could only find A. marmoreus in hedgerows with lots â€“ and I mean lots â€“ of bramble. I would guess (in the absence of a proper survey) that only about 2â€“3% of the network of hedgerows locally is suitable, and this may not be typical of Suffolk as a whole. Also, rarely did I see A. marmoreus at the extraordinary population densities at which A. diadematus can occur in gardens. I had about 20 largish A. diadematus in my moderate-sized garden alone this autumn.

Nevertheless, I never failed to find A. marmoreus in hedgerows on arable land where bramble was profuse, and 2â€“3% of hedgerows still amounts to a lot of habitat. Also, extensive areas of bramble can occur elsewhere apart from hedgerows, such as road and railway embankments. So, A. marmoreus appears to be plentiful in this corner of Suffolk â€“ more so, I would guess, than Araneus quadratus and most other araneid species. Yet there are several references, mostly on the internet, to it being an uncommon or even rare spider in the UK.

Armed with an atomiser to reveal webs, from 15th September to 6th October I measured the height of A. marmoreus webs built predominantly amongst bramble bushes (parts of some webs touched other vegetation) which were at least 2.5 m high and faced open fields. The average height, from the hub to the ground, was 97 cm, (n = 20; range = 49â€“163 cm). Amongst trees in more sheltered situations I could find A. marmoreus webs that were much higher, some over 2 m. Building lower webs amongst bramble bushes in exposed countryside probably helps to reduce wind damage, to both spiders and webs, and to catch large prey such as grasshoppers. Itâ€™s impossible to say whether the spiders actually select locations close to the ground or are more likely to survive there.

Identifying (in my mind at least) a niche for A. marmoreus still eludes me. My notion that it is primarily a species of woodland and wet places has been dealt a mortal blow, since UK habitats donâ€™t come much more open or drier than hedgerows on Suffolk farmland. It seems to occupy a similar niche to A. diadematus which, in bramble hedges, also builds webs close to the ground, with a mean height of 80 cm (n = 13; range = 33â€“142 cm). However, A. marmoreus is more nocturnal. It rarely sits in its web during the day and tends to build a more elaborate retreat. Also, its larger numbers in hedgerows on arable land perhaps suggest that it can tolerate more exposed habitats than A. diadematus. But both species appear to be adaptable, being able to adjust their lifestyle to the environment in which they live.

Four females collected on Thome Moors 19/9/1969 by C.A.H. Apart from these individuals, specimens were noted during the months of July, August and September from 1969 to 1973. Currently thirteen localities are known for this species in Britain, twelve of these being reviewed in Howes, C.A. 1972 (The 'Bog Spider' A. marmoreus Cl in Britain. Naturalist 57-60) six of which are in Yorkshire in the bogs of the lower Vale of York and the Humber levels. A. C. Braham who ran an arachnological supply firm in Huddersfield included several entries in his stock books (now in the Yorkshire Museum, York) of specimens collected in 1946 on Thorne Moors. Of those so far located, all have turned out to be the var. pyramidatus which is rather more widespread and abundant.