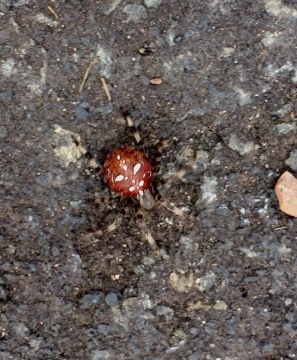 
Whilst checking over a planning application on grassed and over grown mixed vegetation area in my local village I seem to have picked up a passenger and I'm assuming I have identified it right. Araneus quadratus (4 spot Orb spider)

During a short stay (7-12th August 1995) in the densely forested southern part of Slovenia near Podturn, I spent several days in an open grassland area, rich in high herbs, that had not been mown for several months. Orb weavers were dominated by a mixed population of Araneus quadratus and A. diadematus with a few Argiope bruennichi. The webs of both the former were apparently constructed in similar locations, at similar heights and had comparable sizes, although no measurements were taken. Also the mesh size of these webs appeared very similar and even the size of the spiders was comparable. The most conspicuous difference was that, during the day, a number of A. diadematus sat in the hub, whereas all the A. quadratus hid in their retreat at one side of the bridge-thread.

On the morning of a cloudless day I switched the owners of two allospecific webs. The Araneus quadratus landed on the bridge-thread of the A. diadematus web and immediately retreated to a tangle of leaves and thin stems at one extremity of the thread. The web of A. quadratus was severely damaged during the transfer of the A. diadematus, which immediately left the web. The A. quadratus remained in the retreat until a medium-sized grasshopper was thrown in at the side of the web opposite to the retreat. It took about ten seconds before it reacted. It went to the hub from where it immediately continued to the place where the grasshopper had been caught. This prey was then treated as usual. The spider remained in the retreat until shortly after sunset. It then took down the web, leaving the bridge-thread intact, and disappeared. Two months later (8th October) I carried out a similar experiment with the same two species in my home neighbourhood (Huldenberg, Belgium). Although these species share the same macrohabitat, the microhabitats are obviously different in that area. Generally speaking the area is swampy, overgrown with herbs and with dryer banks covered with shrubs. A. quadratus makes its web among the tall herbs fairly near to the ground, whereas A. diadematus constructs its webs higher up in the shrubs. The webs of these species can be very close together, but the location alone is sufficient to know what species is living in it. Moreover the mesh-size of the webs of A. quadratus was obviously larger than that of A. diadematus. This may be linked with the size of the animals: A. quadratus is obviously heavier at that time of the year than A. diadematus. Two A. quadratus were introduced into A. diadematus webs. The first trial did not succeed as the introduced specimen was too heavy for the host-web. The second trial succeeded, with the spider reacting almost exactly as the one in Slovenia had done: it retreated to the nearest tangle and used the web apparently without a problem to catch an earwig that was thrown in. However, this spider left the web after sunset without taking it down.

On 9th September 1993, a male Araneus quadratus was swept from low herbage in a wet area of duneland at Talacre, Clwyd (SJ 12-85-). It appeared to be holding a small caterpillar in its jaws. On closer examination, to my surprise, this proved to be a specimen of the land planarian Microplana terrestris (Muller). Previously, I had observed several examples of this widely distributed British species in the surrounding area. However, as it is almost invariably found beneath stones or decaying wood, it is difficult to imagine how the spider actually caught it. Perhaps both were somehow swept up together in the net, where the spider might have seized and killed it by chance, rather than having taken it as a targeted prey item.

Added by John Partridge at 13:03 on Sat 31st Dec 2011. Return to Summary for Araneus quadratus