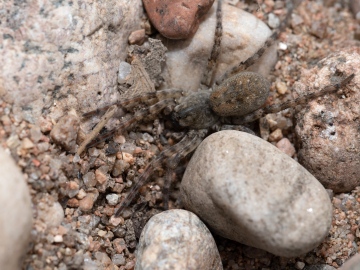 I have just returned from Wales where I looked for Arctosa cinerea, locating it at a known site on the River Rheidol near Aberystwyth. Whilst there, I took photos of the spiders at their burrow entrances, which were over a centimetre in diameter. Initially I searched under stones, as suggested in the literature. After a long search I found a single specimen. I began to realise that the spider does not actually live under stones as such, but instead acts like an enormous Arctosa perita, constructing a burrow and sitting in the sunshine at the entrance to hunt. I began to look for burrows in dry shingly sand and found over 20 in a small area in quick succession. The spiders appear at the burrow entrance after a short while, disappearing at the slightest movement.

As fellow colleagues in other Museums will know only too well, for every ninety-nine identifications one makes for members of the public, only one will turn out to be of special interest, and it is therefore all too easy to discourage visitors from bringing in further 'finds' if one is careless enough to show any lack of enthusiasm while dealing with their queries. Diplomacy when identifying something comnon can encourage people to return again and again and suddenly -the 'one-in-a-hundred' identification turns up and one's enthusiasm is spontaneous and genuine. Such was the case recently when I returned to the Museum after some leave, to find a live specimen of Lycosid awaiting my attention. It had been found on the stoney river bank of the River Sirhowy in Gwent during August. Thinking it to be one of the commoner species I tried to identify it with a hand lens without killing it. However, when I realised it was Arctosa, a genus that I lacked in my collection, I killed it and examined it under the microscope. With honesty I must admit that I still wasn't sure of the evidence before my eyes, so packed it off to Dr. Peter Merrett for comment. He was pleased to advise me that it was an adult male Arctosa cinerea and the furthest southern record in Britain to date.

I cannot help comparing the ease with which this specimen came to hand, with a. certain day's searching for it on a shingle bank of the River Tay in 1974, while staying at Kindrogan Field Centre, Perthshire. We seemed to have turned over nearly every rock and boulder in the area, and one of the party (who will, no doubt, remember the incident well) even waded up to his armpits across the river to try the far shore, but all to no avail. Even the sun went in, and the rain came down on us to add insult to injury, before we retired empty-handed from the area. However, although it is very pleasant to receive that which you need with so little effort, Arctosa cinerea will always be connected in my mind with the River Tay and my good companions of that day.