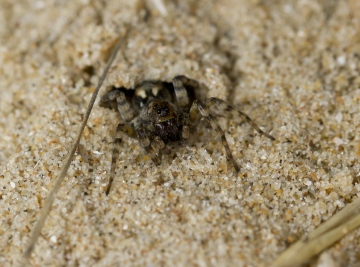 Two males and one female taken by John Burn and C.A.H. 13/10/1973 at Hatfield Lings (S.E. 65-07-) , a system of old sand and gravel pits recolonised by Calluna, Erica, Pteridium, Ulex and Sarothamnus. Many occupied tubes were found, the most favoured situations appearing to be the zone of loose granules at the foot of old, well eroded, sand embankments and workings. This is a thriving colony and the first inland population known for Yorkshire - no doubt further searches will reveal more. The only other records to hand for this most attractive lycosid are from Spurn, where, like L. purbeckensis it was recorded by Braham and Murgatroyd in 1953 and Sudd 1972.

Arctosa perita (Latreille, 1799) showed very strong associations with bare ground and the sparse vegetation typically found in frontal habitats. A. perita is considered as a frontal dune specialist by other authors such as Almquist (1973) and Duffey (1968), although this species also occurs inland on heathland (Leighton, 1972), old ironstone workings (Horsfield, 1979), river banks and shores (Foelix, 1982) and old sand and gravel pits (Howes, 1974). What appears to characterise all of these habitats is first that the substrate is granular and loose in nature and secondly that the vegetation is in the pioneer stages of plant succession where plant cover is reduced. It seems likely that A. perita is found in such habitats because it is a burrowing species which needs to excavate its runnel in substrates that can easily be moved to form an opening.