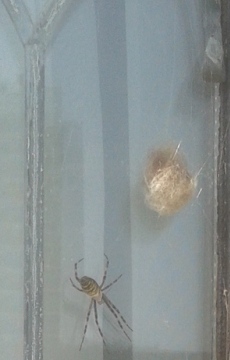 
Argiope Bruennichi and her lawn
This note is based on observation of a single individual across several days towards the end of September 2012.

There is an area of short grass under her web. This area is an oval about 52 cm x 40 cm in diameter. The tips of the grass stems have been bitten off at a height of less than 3cm. (See photos)

This area lies in the base of Marsh thistle that is beginning to fall over somewhat as it dies back after the summer. It was at the edge between dense growth of Marsh Thistle and a tall (1.8m) species of grass.

Prey wrapping and silk types - Argiope bruennichi
On 19/9/2012 I tried to throw a grasshopper onto a web of Argiope bruennichi. I missed but after a little while the grasshopper jumped into the centre of the web. The female spider immediately wrapped it with a blanket of the filmy type of silk that some photos show on the web. This occurred almost immediately (the whole process in less than 3 seconds, possibly under a second). I believe she used silk that she already had laid on the web and merely wrapped the grasshopper in it - the action was too quick to be certain. Once firmly wrapped she sank her fangs into it. After the grasshopper had been wrapped there was no obvious excess silk on the web - though there had been earlier in the day.

When she had previously caught an insect at the edge of the web and had to produce new silk to wrap it the process was considerably longer.

Does anybody else have similar observations?

There appear to be two different kinds of extra silk on the webs of bruennichi - that laid down in zigzag patterns and that produced as a fine blanket of uniform density.

Killing Power of the Orb-weaving Spider Argiope bruennichi (Scopoli, 1772) During a Mass Occurrence by Martin Nyffeler

Argiope bruennichi (Scopoli, 1772) is one of Europe's largest and most conspicuous orb-weaving spider species. The female, 14-17 mm in length, reaches adulthood some time in late July, at which time it spins nearly vertical orbwebs, about 25 cm diameter, near ground level amongst tall grass (Wiehle, 1931). The species is sometimes found in large numbers locally. Mass occurrences of A. bruennichi have been repeatedly reported in the literature (Wiehle, 1931; Lohmeyer & Pretscher, 1979; Malt, 1996). An incidence of this type was witnessed by Lohmeyer & Pretscher (1979) during the exceptionally warm and dry summer of 1976 near Bonn, Germany in an old field of uncut grassland heavily infested with weeds: average numbers of 6 per m2 were recorded in mid-August. (This figure refers to adult females found in webs.) Because adult females spin orbs with an average catching area of about 500 Â± 36 cm2 [mean Â± SE] (see Nyffeler, 1982), one can extrapolate that the combined web area spun daily by the A. bruennichi population near Bonn may have been approximately 3,000/m2/ha grassland during August and September (except for rainy days). Such a huge web area would be expected to exert an enormous predation pressure on insects. Here I attempt to quantify the killing power of A. bruennichi during a mass occurrence, such as the one witnessed near Bonn.

Potential killing power
Large orb-weaving spiders have been observed to kill prey in excess of their nutritional needs ('superfluous killing' sensu Smith & Wellington (1986) and Riechert & Maupin (1998)). A single orb-web can catch up to 1,000 small insects per day (Kirchner, 1964; Naton, 1976). Maximum capture rates of up to seven medium-sized grasshoppers/web/day by A. bruennichi have been recorded in the field (Nyffeler, 1982). Grasshoppers are the favourite food of A. bruennichi at many locations (Wiehle, 1931; Lohmeyer & Pretscher, 1979; Nyffeler, 1982; Malt, 1996). By multiplying the maximum killing capacity per web with the maximum web density reported in the literature, we get an idea of the magnitude of the killing power of these spiders occurring at high densities. Hence, large orb-weaving spiders during a mass occurrence theoretically could kill: [7 grasshoppers/web/day] x [60,000 webs/ha] = 420,000 grasshoppers/ha/day.

The grasshopper species referred to have an estimated average fresh weight of about 145 mg per individual (see Malt, 1996) and the combined weight of 420,000 grasshoppers/ha/day is therefore roughly 60 kg/ha/day.

During a dry summer (i.e. rain-free apart from sporadic evening thunderstorms), an orb-weaver population is expected to catch prey uninterruptedly for 61 days (in August and September), whereas their activities may be limited to about 40 days under less favourable weather conditions (see Malt, 1996). Hence, by multiplying the daily prey biomass (60 kg/ha/day) with the number of days available for foraging one would expect a theoretical maximum prey kill of around 3,660 kg/ha/season during a dry summer (and about 2,400 kg/ha/season under less favourable weather conditions). The estimate of 2,400-3,660 kg prey/ha/season is purely speculative. Nevertheless, this hypothetical calculation demonstrates the enormous potential killing power of these orb-weaving spiders (regardless of whether or not this potential is fully achieved in the real world).

Actual killing power
What then is the actual prey kill of A. bruennichi during a mass occurrence? Considering the food requirements of an adult female and assuming that these requirements were met in the investigated grassland near Bonn during the summer of 1976, I would expect an actual prey kill of around 200-300 kg/ha/season. This assumes that an average adult female catches 80-90 mg prey/web/day for 40-60 days in August/September. This estimate is based on 10-17 webs (depending on availability) of adult females monitored from 09.00 to 18.00 hours on three consecutive days in early August 1976 in a field study near Zurich (Nyffeler, 1982). At this prey capture rate, adult females of A. bruennichi appeared well-fed (Nyffeler, unpublished). However, in Lohmeyer & Pretscher's (1979) study the adult females were of noticeably small body size which indicates that they were feeding below their requirements. It seems that during a mass occurrence of large orb-weaving spiders a predation pressure is exerted of such proportions that prey numbers inevitably collapse (because of overexploitation of the food resources owing to intraspecific competition: see Kajak et al. (1968)). Hence it follows that the underfed population near Bonn was catching prey at a much lower rate than the well-fed adult females near Zurich which occurred at 12-20 times lower densities, which suggests that the prey kill was in reality less than 200 kg/ha/season. Malt (1996) estimated that the prey kill of an A. bruennichi population during a mass occurrence near Jena, Germany, was about 85 kg/ha/season. Usually spider numbers are reduced significantly in the year following a mass occurrence (see Wiehle, 1931; Lohmeyer & Pretscher, 1979; Malt, 1996).

Conclusions
Because of the limitation of the food supply, extraordinarily high prey kill, as theoretically predicted by Turnbull (1973), is unlikely to be found in nature (at least not in the case of Argiope spp., which depend almost exclusively on larger-sized insects as a food source). For the sake of argument one could assume an ecosystem with unlimited food supply (e.g., due to allochthonous input, see Polis & Hurd, 1996). In such a scenario, excessive feeding would presumably be followed by the spiders spinning webs of smaller size and/or rebuilding them less frequently (see Witt et al., 1968). (The spider is no longer hungry and consequently the amount of energy invested into foraging is reduced.) Here again mechanisms come into play that would set limits. The upper limit of the prey kill estimates published in the literature are of the order of 200 kg/ha/yr (see Robinson & Robinson, 1974; Nyffeler, 2000). It cannot be ruled out, however, that there are systems somewhere, so far undiscovered, where large orb-weaving spiders, occurring at high densities, are filtering huge numbers of mosquitoes, caddis flies, stoneflies, mayflies and other tiny insects from the aerial plankton originating from nearby aquatic ecosystems. In such situations the prey biomass killed by spiders may exceed the values previously reported in the literature. Evidently large orb-weaving spiders can exert significant predation pressure on insect populations (see Kajak et al., 1971; Nyffeler & Benz, 1989; Malt, 1996), even though only a fraction of their enormous killing potential (of 2,400-3,660 kg prey/ha/season) is achieved in the real world.

There is also indirect evidence for the significance of orb-weaving spider predation: quite a number of insect species have evolved morphological and/or behavioural adaptations to reduce the risk of being entrapped in spider webs (see Eisner et al., 1964; Nentwig, 1982). Wise (1993) commented '. . . spider predation has been intense enough to mold the evolution of prey characteristics.'

Acknowledgements
I would like to thank Drs Matt Greenstone, Christian Kropf and Keith Sunderland for helpful comments.

Added by Sue Chadwick at 22:26 on Fri 7th Oct 2011. Return to Summary for Argiope bruennichi