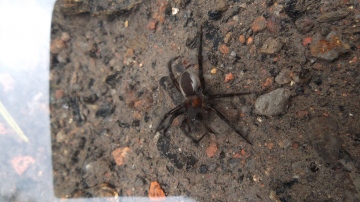 
Part of SOME INTERESTING ENCOUNTERS WITH SPIDERS by S.J. Moore

The other experience concerns the water spider Argyroneta aquatica (Clerck) . I have now kept specimens for several years and was asked to provide some for a Television Nature Programme. Unfortunately, I had no specimens at the time and had to ask a friend in Norfolk to send a few. Unfortunately, he sent them in water and no doubt the movement in transit caused the water to splash them about, so that on receiving them there was just a blob of spiders all tangled up with each other and looking very dead. Naturally, the programme organisers and myself were very disappointed, but having been able to give a water spider 'artificial respiration' once before, I decided to have a try.

First of all the spiders were dried out on some blotting paper so that they could be disentangled with the aid of a small brush. Altogether there were eight - two juveniles, three gravid and three non-gravid females. To put some life into them involves brushing the abdomen against the direction of the air-trapping hairs, like stroking a cat backwards. This action presumably sends tiny nerve impulses thrilling through the spider's body, as the legs twitch momentarily after each stroke. After about twenty minutes, three spiders were moving without aid, and ten minutes later were crawling groggily over the blotting paper, although their hind legs were dragging. Half an hour later all the others had recovered this much and within an hour were crawling slowly over the paper, a few dragging some limbs. Three hours later they all appeared perfectly normal and I gave them the option of becoming water spiders again. All dived straight under the surface at once, five stayed under but three others came out again and rested.

Next morning, the day of the show all were still alive, one had built an underwater cocoon and was busily engaged all day, both the juveniles and two others had built air-bells. The remainder were playing safe in the dry state and one of them - a gravid female finally died in the studio. The others behaved perfectly and were later released. Has anyone else given 'artificial respiration' to a water spider? I would be interested to know.

Added by John Partridge at 15:56 on Wed 4th Jan 2012. Return to Summary for Argyroneta aquatica