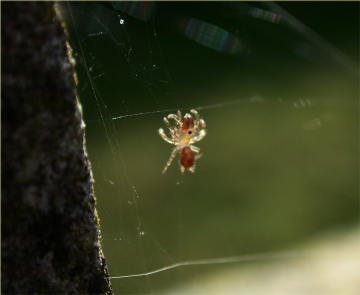 On the 1st June 1998, whilst spidering on the Great Orme, Llandudno, North Wales (Nat. Grid Ref. SH 765825; 40 m), I came across 13 detached, earth-encrusted, silk tubes which were scattered on the surface of a 70Â° slope at the side of a south-westerly facing footpath. These were clearly detached Atypus affinis tube webs so a search in the immediate vicinity was initiated. Despite half an hour of searching no typical A. affinis retreats (i.e. tubes emerging from the soil resting along the ground) were found. During the search I had noticed several small mounds of soil particles, but had dismissed these as the work of burrowing Hymenoptera. As no typical attached tube webs could be found, I decided to excavate one of these soilmounds. Scraping away the soil particles revealed a silk lined burrow, which contained a healthy A. affinis female. A second, smaller female was also taken from a similar situation. I investigated several other mounds and the presence of a silk-lined burrow confirmed their contents. Both specimens were maintained in captivity where they constructed the typical tube web up the side of their containers. As both specimens are still alive (September 2000), they were not parasitised individuals. On the 4th May 1999 Geoff Gartside and I revisited the site, and once again found the characteristic soil mounds. This time we also encountered two typical emergent tube webs. This behaviour is probably a result of concerted burrow excavation and enlargement, perhaps prior to moulting. It is well known that theraphosids indulge in this behaviour (Minch, 1979). It may well prove fruitful looking for these soil mounds as well as tube webs in searches for this spider.

Added by John Partridge at 15:51 on Thu 9th Feb 2012. Return to Summary for Atypus affinis