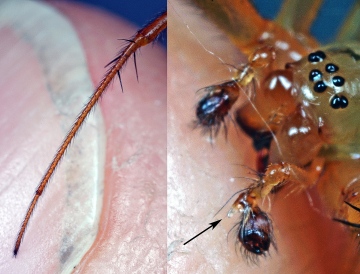 Mating in Metellina segmentata typically involves the capture of a prey item by the female, whereupon the guarding male initiates courtship (Blanke 1974; Prenter, Elwood & Colgan, 1994; Fig. 1). This behaviour may constitute a sexual cannibalism reduction strategy (Prenter, Elwood & Montgomery, in press). Here, we describe alternative mating behaviour of males observed in field studies carried out at Murlough National Nature Reserve, Dundrum, County Down, Northern Ireland. Double male-guarded females constituted 7 per cent of all guarded females in population surveys (Prenter, Montgomery & Elwood, 1994). Mating and inter-male behaviour were observed when two males were present on the web of a female and a suitably sized prey item (laboratory raised Calliphora) was introduced into the web.

Females captured the introduced prey item in the majority of cases (73 per cent) and courtship behaviour ensued with or without agonistic interactions between rival guarding males. Where interactions between males occurred (59 per cent of all observations), the winning male initiated courtship of the female. Three males were observed to capture the introduced fly. Two of these males subsequently used the captured fly to initiate courtship, waiting for and inducing the female to approach the prey and engage in courtship. On one further occasion, the males fought before the female had captured the introduced prey item. The larger of the two males killed the other, wrapped the corpse with the captured fly and subsequently encouraged the female to come to the prey item and successfully mated. On three occasions, following apparent defeat and withdrawal from the web, and having dropped into the vegetation below the web, the losing male returned several times and initiated repeated, low intensity, agonistic interactions (sparring) with the winning male. One of these three males ousted the incumbent male and went on to mate with the female. One male repeatedly withdrew from the web and the winner of the earlier aggressive interaction mated. In the remaining interaction, the winner of the agonistic interaction courted the female. The loser, however, repeatedly returned onto the web and engaged the courting male in relatively low intensity, sparring behaviour. During the to and fro movement of the courting pair around the prey item and on the nuptial thread, the winning male repeatedly returned to the prey item and the nuptial thread attached to it. The loser intercepted the female and mated. Repeated interactions were not characterised by the high intensity, potentially injurious activity observed in the fights between males, which determine the primary male to court a female. Fatalities may occur in such male-male interactions: two males were observed to fight to the death.

Therefore, interference behaviour, with males interrupting the courtship of rivals (Nielsen & Toft, 1990), was apparent in M. segmentata in the present study. However, this did not significantly prolong the duration of courtship and the duration of copulation did not increase in the presence of a rival male. Two forms of 'nuptial feeding' of the female by guarding males were observed; males either captured the introduced prey item and used it in courtship, or used the corpse of a vanquished, rival male.

The mating behaviour described previously in M. segmentata (Blanke, 1974; Prenter, Elwood & Colgan, 1994) is not, therefore, the only way in which males may obtain a mating. Further, the male to mate is not invariably determined directly by the outcome of male-male agonistic interactions as in other spiders and arachnids (e.g. Benton, 1992). Such fights between male M. segmentata often determine which male will guard and have an opportunity to court and mate with a female (Prenter, 1992; Prenter, Elwood & Colgan, 1994). Following defeat by a rival, males may employ interference tactics to obtain a mating. This is probably conditional on inferiority and defeat in an aggressive interaction. The behaviour described here constitutes alternative mating behaviour in male M. segmentata which differs from that previously described by Rubenstein (1987) in which males varied in the location of mate defence and courtship. Prey capture by males on the web of a female and subsequent initiation of courtship has also been observed in Metellma mengei (Prenter, 1992). The use of the body of a dead rival to initiate courtship of a female was also recorded on two other occasions in M. segmentata (Prenter, 1992). Unlike other known instances of nuptial feeding in spiders (e.g. Austad & Thornhill, 1986), however, females did not feed during copulation.