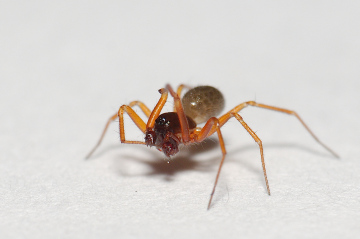 The observations on Porrhomma convexum, made by Mr. Chapman, are in agreement with my experiences in collecting cave spiders in Yugoslavia and keeping specimens alive in glass containers at home.

In general, species of the Linyphiidae with unicoloured abdomen exhibit a range of variation in depth of colour (melanin pigment) from fully pigmented to almost colourless. The pigment is most persistent around the eyes and on the ventral surface of the body (sternum and abdomen) which is turned towards the light in the spider's normal position. Individuals taken in the twilight zone usually are darker than those found in the deep, totally lightless parts of the cave, where specimens of species that are normally well pigmented may have the melanin restricted to light shading around the eyes. It appears to me that melanin pigmentation in troglophilic species can be switched on in response to light. Occasionally we find dark coloured specimens in the depth of the cave, but these may have moved in after the melanin was established. Thus colour change is not restricted to the moult but I am unable to say how quickly colour change can be accomplished, and whether it is reversible.

However, in troglobitic species this capacity seems to have been lost. Troglohyphantes gracilis has small, unpigmented eyes and pigmentation on the body is obsolete, also in those specimens collected in semidark zones in the cave. Troglohyphantes roberti, a species I recently described from caves in Croatia, Yugoslavia, never shows any trace of eyes and is totally pigmentless. The chitinous parts of these species are yellow to orange, the abdomen white or light grey. An adult female of T. gracilis was kept by me for over a year in a glass jar in a cupboard and a sub-adult male of T. roberti is still alive after 14 months of confinement in this cupboard and has undergone one moult successfully.

The cupboard is comparable to the twilight zone in a cave, faint light does get through. The chitinous parts are still colourless, almost transparent, but the colour of the abdomen has gradually become darker, and eventually nearly black, which is a shade that is never found in specimens in their natural surroundings.

After the death of the T. gracilis. I dissected the abdomen and to my surprise I found that the pigmentation was not located on the surface in the hypodermic cell layer as is the case in troglophilic Troglohyphantes with a dark abdomen. The pigmentation was uniformly dispersed over the fatty and albuminoid material contained in the interstitial tissues of which the major mass of the abdomen is composed. In Grasse it is mentioned that these interstitial cells have a glandular character and it may be that these cells produce the pigment in situ as a response to the illumination. Another, less likely, explanation could be that the pigment is derived by uptake from the prey (Diptera) and stored in the cells. Under natural conditions a large part of the food also consists of normally pigmented Diptera, from outside, seeking shelter for diapause within the cave.

Secretary's note; It would seem that the variation in the pigmentation of the Linyphiid species referred to above can also be seen in the species of other Families. In Locket and Millidge: British Spiders Vol. II (1953) it is stated that the Theridion species Robertus lividus (Bl.) and Robertus arundineti (O.P-Camb.) are found in detritus and vegetation. Nearly all the specimens I have collected were taken from beneath half embedded stones on moorlands and mountain sides. In the case of R. lividus all the specimens, unless newly moulted, have been of very dark pigmentation. But in the case of R. arundineti those specimens found near to the surface are usually dark coloured, while those found deep down under an accumulation of boulders, which were heavy and difficult to move, have frequently been found with egg sacs and these are always, in my experience, very pale in colour apart from the epigyne which shows up distinctly. The cephalothorax is also of a much,lighter colour than for those specimens taken near to the surface of the ground.

Is a colour change in Porrhoma convexum (West.) possible? by Mr. Philip Chapman

During a visit to Otter Hole Cave (Forest of Dean) on 8 September 1977 I took 3 adults and a juvenile of Porhomma convexum (West.). One female had the normal colouration with a grey abdomen, as described in Locket & Millidge (1953). However, the male and a second female both had a shiny, creamy white abdomen. The juvenile had a glassy, almost colourless carapace and sternum and a pale grey abdomen. Both females but not the male had the extra dorsal spine on femur I which is occasionally found in this species. The male, the juvenile and normally coloured female were consigned to alcohol, but the second female was kept alive in a container which excluded direct light. The colour remained as it had been in the cave until 30 September. Then on the 2 October I was surprised to see that the abdomen had become grey-black in colour.

If the original white colour of the abdomen was due to a recent moult, then it seems strange that it took at least 22 days for pigmentation to revert to normal.

Can any readers shed light on this observation.

Added by John Partridge at 16:58 on Sun 8th Jan 2012. Return to Summary for Porrhomma convexum