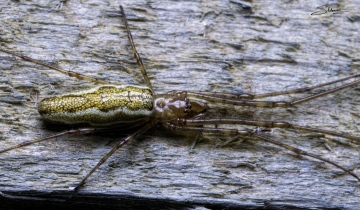 In late July 1995, a number of large, mature Tetragnatha extensa females were captured by sweep-netting at Can-Mill Dam, St Helens (Nat. Grid Ref. SJ 526977). On handling, some of the spiders simply dropped to the ground on a safety line anchored to my hand. Two of the females, however, climbed along my hand to a finger tip, about 1 m off the ground. There they raised their abdomens in the air at approximately 60Â° to the horizontal and orientated to the direction of the light breeze. They then exuded a silk line, which eventually became anchored to nearby tall grasses, and climbed along it onto the grass stems. The weather was warm and sunny (c. 25Â°C) with a breeze of about 5 knots.

There are many recorded incidents of spider ballooning (using silk for aerial dispersal) in the literature, including representatives of the Thomisidae, Lycosidae, Araneidae and especially the Linyphiidae. This is however, the first time I have seen a large mature tetragnathid apparently attempt such behaviour. But maybe I am mistaken in my interpretation of this behaviour and the spiders were in fact attempting to create a bridge line as a starting point for possible web building. I would be interested to hear readers' comments on this.

Added by John Partridge at 10:56 on Thu 9th Feb 2012. Return to Summary for Tetragnatha extensa