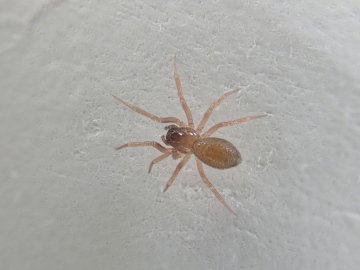 Distribution
The species has been recorded from Kynance Cove and Rame Head in Cornwall, Lundy Island and Prawle Point in Devon, New Forest and Woolmer Forest in Hampshire, Studland, Hartland Moor and Morden NNRs and Parley Common in Dorset, Thursley Common NNR in Surrey and Dungeness in Kent. The species is widespread in north-western and central Europe, but has not been recorded from Ireland or Norway.

Habitat and ecology
The spider is restricted by dependence on its ant host to dry heaths and coastal grassland in the south and west. A. scurrilis occurs in the nests of the ant Tetramorium caespitum (L.). The spider is sometimes taken in pitfall traps when dispersing (usually females, very occasionally males). Adult males have been taken in pitfall traps in May and September, and females between April and October, but adults are possibly present in ants' nests throughout most of the year. Denton (1999b) notes it as abundant in Tetramorium nests in Woolmer Forest in October.

Status
The species has a limited area of occupancy having been recorded from just eleven hectads in total. Since its specialised habitat is not often investigated by arachnologists, it may not be as rare as the number of records suggests.

Threats
The loss of dry heathland. In Britain the host ant, T. caespitum, nests in areas of dry lowland sandy heath and coastal zones. It is predominantly a southern species requiring habitats with sparse vegetation cover (greater than 40% bare ground) and attracting high levels of insolation at the ground surface.

Management and conservation
Maintain open areas in dry lowland heathland and coastal grassland in suitable condition for the host ant.