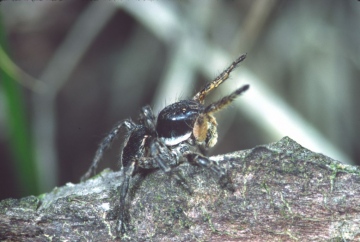 Distribution
A. v-insignitus is confined to England south of a line from the Wash to the Severn, apart from one record for Ramsey Island in Pembrokeshire and two localities in Scotland, where an 1895 record from Fife was confirmed in 1999 and the species was recorded in Holyrood Park, Edinburgh in 1998 and 1999. It is widespread in Europe.

Habitat and ecology
Heathland and dry grassland. This species occurs mainly in dry, open, sunny areas on heathland, and also on short, stony calcareous grassland, usually near the coast, and occasionally on rocks near the sea. On heathland the spider reaches highest densities between about 4 and 10 years after burning, but may be present even on mature heathland. Males are adult from May to July and again in late August and September, females are adult from May to September.

Status
The spider is sometimes common on heathland, but rather local. It is probably commoner towards the south-west and near the coast than in the south-east.

Threats
The loss of heathland to agriculture, forestry and development.

Management and conservation
Maintain all seral stages of heather by rotational management. This species is able to survive in all ages of heather, but is more abundant in younger heather.