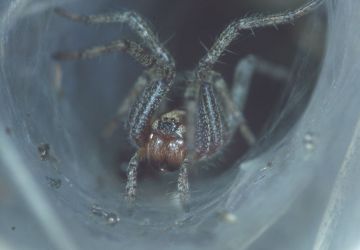 Habitat and ecology
This species is found in the vegetation of rough uncut grassland, uncultivated field edges and low bushes of gorse and heather where it spins a large conspicuous sheet web with a funnel retreat on or above the ground. It can occur at high densities. Juveniles often make webs in lower vegetation e.g. short grass. The spider waits at the end of the tubular retreat for prey, largely grasshoppers, to alight and become entangled on the web whereupon it rushes out and takes the prey down the tube for consumption. In late summer, the female builds a large and very elaborate chamber in the vegetation to enclose her eggs. The labyrinth of passages within its dense white walls have earned the spider her name of labyrinthica (Bristowe 1958). Adults of both sexes are found mainly in July and August, females later. Males are often found cohabiting within the retreat of a penultimate instar female, as happens in at least some other agelenids, such as Tegenaria saeva and T. gigantea.

Status
Common in the south of England.

Adult Season Data (based on 769 records with adult season information)

Recorded substrate and hydrology for locations with Agelena labyrinthica

Agelena labyrinthica living on the ceiling of a Bird Hide