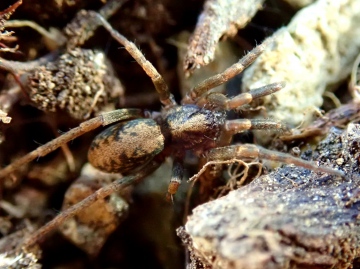 Distribution
There are widely scattered records from the south coast, especially in Kent, and inland in the Norfolk Brecks, and it has recently (2007) been recorded from Humphrey Head at the head of Morecambe Bay, Lancashire. Its continued presence at its only known Scottish site, in Kincardineshire, was confirmed in 2009. It is widespread in north-western and central Europe, but has not been recorded from Ireland, Denmark or Finland.

Habitat and ecology
Heathland, coastal grassland, dunes. A. cuprea is found in a variety of dry sandy habitats e.g. heathland at Kynance Cove, Cornwall, sand dunes at Rye and Camber, Sussex, and Sandwich, Kent, dry grassland near Folkestone, Kent, in Devon and on Breckland heaths. All sites are coastal apart from the Breckland. Both sexes have been found in September, females also in April and May. A male has also been taken in October in Breckland. The phenology is possibly similar to that of most other Agroeca species, males of which are mature in September and October, with females persisting for most of the year.

Status
UK Biodiversity Action Plan priority species. The spider may be fairly numerous where found, but apparently very local. It is known from three locations since 1992. It appears to have suffered major decline in area of occupancy, but as its records are scattered over a wide area, it may possibly occur in other dry coastal sites as shown by its recent discovery in Lancashire.

Threats
There is possibly little threat to its coastal cliff-top sites, but its sand dune sites are likely to be threatened by holiday development, golf courses, etc, and its Breckland sites by afforestation.

Management and conservation
Ensure that coastal sites for the species are protected from further development or recreational pressures. Protect Breckland sites from uneccessary afforestation.

Adult Season Data (based on 31 records with adult season information)