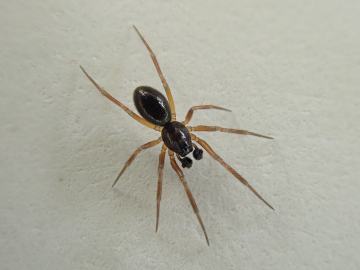 Distribution
The species is confined to the south of England. In Europe it has been recorded from France, Belgium, Germany, Switzerland, Austria, the Czech Republic, Hungary and Romania.

Habitat and ecology
M. simplicitarsis occurs mainly on calcareous grassland near the coast and grazing marsh grassland, usually in taller tussocky grass. Occasional records from heathland areas and shingle possibly represent stray individuals from nearby grassland or roadside verges. Adults have been recorded in most months of the year, with a peak between spring and mid-summer.

Status
The spider may be relatively frequent in some areas. It is fairly common on chalk and limestone grassland near the coast in Dorset and Sussex, and in grazing marsh grassland in Essex and the north Kent marshes, but there are few records from elsewhere.

Threats
Overgrazing and the loss of calcareous grassland and coastal grazing marsh grassland to arable agriculture.

Management and conservation
Grazing levels need to be low enough to maintain structural variety and tussocks in grassland.

Adult Season Data (based on 246 records with adult season information)