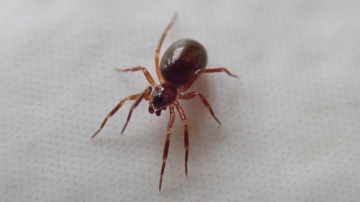 Distribution
The species is widespread, but records are more scattered and patchy in the north. A Palaearctic species widespread in north-western and central Europe.

Habitat and ecology
A. subtilis is found in a variety of habitats including undergrowth and leaf litter in broad-leaved woodland, and in moss and grass. Merrett (1990) has reported that after the burning of dry heath this species can reach and remain at high densities in the regrown, mature heather. It is adult in spring, summer and autumn with a peak of activity in May and June (Merrett 1969). Our data record adults of both sexes from early to mid-summer, with females persisting until the autumn.

Status
Frequent in some areas.

Adult Season Data (based on 463 records with adult season information)

Recorded substrate and hydrology for locations with Agyneta subtilis