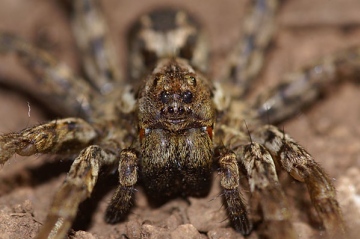 Distribution
The spider has been recorded at three distinct sites, in two small areas of Morden Heath, Dorset, and on Hankley Common, Surrey. Each occupied a small area, and, since the spider is large, the population density is low and therefore vulnerable.It has also been recorded from France, Belgium, the Netherlands, Germany, Denmark, Sweden, Norway, Finland, Russia, Poland, Hungary, the former Czechoslovakia, Switzerland, Austria, Italy and the Balkans.

Habitat and ecology
Heathland. A. fabrilis inhabits a burrow in sandy soil or holes under stones. The preferred habitat is dry sandy heathland with some open stony areas. It has also been found wandering on ploughed firebreaks but may not be resident in such habitat. The habitat at Morden Heath consisted of largely open stony areas near the top of a hill and at the sides of gullies. Bare areas were partly caused by mililitary training in the war. Both sexes are adult in September and October, and females probably over-winter.

Status
UK Biodiversity Action Plan priority species. There are no records from Bloxworth Heath since 1900 or Morden Heath since 1965. At Hankley Common the population is likely to be small and survey work to ascertain its current status is urgently needed.

Management and conservation
Because of the vulnerability of the localised spider populations, fire is unsuitable as a management tool, and regular removal of the invading pines by hand-pulling should be undertaken. This regime may lead to a build up of litter and humus. Thus further management to restore patches of bare stony ground may be necessary, possibly by localised grazing. At Hankley Common, small-scale disturbance of the vegetation in the course of army training exercises may be maintaining the desired habitat.