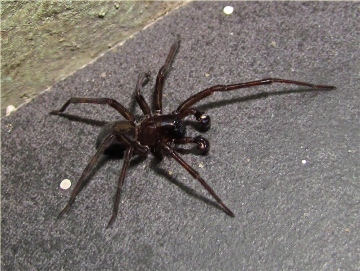 Distribution
The species is widely distributed in England, mainly near the coast in Wales and with few records for Scotland. It is a Holarctic species, widespread in western and central Europe, but becoming rare in the north. It is absent from Norway, an occasional import in Finland and listed in the Red List for Sweden (Gardenfors 2000). The species has been introduced to Canada, the United States and Mexico.

Habitat and ecology
The species is found in gardens, cellars and outhouses under rubble or other debris but is also recorded in more natural habitats under logs in woodland or hedgerows and under stones. According to Bristowe (1958) the species is more likely than the other two Amaurobius species to be found in shady and damper situations in walls or at the entrances to caves or tunnels. It is probably under-recorded despite its large size and impressive appearance. Adults occur throughout the year but mainly in the spring and early summer.

Status
The spider is much less common than A. fenestralis and A. similis and becomes rare in the north of Britain.

Adult Season Data (based on 525 records with adult season information)

Recorded substrate and hydrology for locations with Amaurobius ferox

Resting on the wall