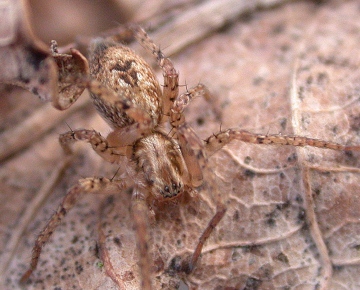 Habitat and ecology
This species is found in woodland and bushy areas. It is easily recognisable by the distinctive arrow-like markings on the abdomen quite unlike any other British species. The spiders hunt and mate on the leaves of trees and bushes. During courtship the male is known to emit a high pitched buzzing sound by vibrating its abdomen on a leaf. This sound may be inaudible to older people. Adults of both sexes are mostly found in early to mid-summer with females sometimes surviving through to the autumn. Immatures can be found in ground vegetation, leaf litter and under bark in the autumn and winter.

Status
Common and locally abundant especially in the south of England.

Adult Season Data (based on 1034 records with adult season information)