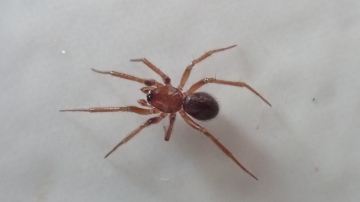 Distribution
A. misera is widespread on southern heathlands and in East Anglia, in a band from south-west Wales to Yorkshire, and in northern England and the Borders but the Distribution: is scattered elsewhere and the species is absent from many areas of southern England. It is a widespread, northern Holarctic species (Platnick 1998; Denis 1969).

Habitat and ecology
This spider inhabits undisturbed, acidic wetlands such as fens, mires and blanket bogs. It is commonly found in the uplands where it lives amongst low bog vegetation. Adults have been recorded throughout the year, mainly from January through to the spring and summer. In North Wales, egg-sacs have been found in June affixed within clumps of Polytrichum commune. The female stands guard over the single egg-sac.

Adult Season Data (based on 771 records with adult season information)

Recorded substrate and hydrology for locations with Aphileta misera