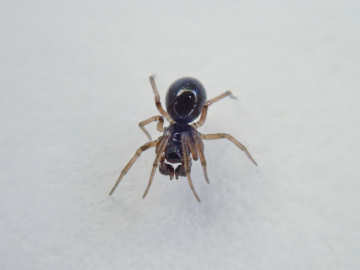 Habitat and ecology
A. crassiceps occurs in a variety of habitats including moss, grass, straw, litter, tideline debris and heathland, but in rather damper conditions than those favoured by A. humilis. On heathland in Dorset males were found to be active from May to July.

Status
This species seems to have undergone a significant major decline. Trend analysis of the continuing decline in area of occupancy over the period 1976 to 2005 indicates a reduction in population size of 45% over a ten year period.

Threats
Destruction of heathland and grassland for building and agricultural development. Drainage of wet areas in these habitats.

Adult Season Data (based on 220 records with adult season information)

Recorded substrate and hydrology for locations with Araeoncus crassiceps