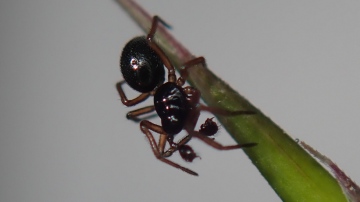 Distribution
The species has a widespread but patchy Distribution: in much of England and Wales, and is scattered in Scotland. It is widespread in most of western and central Europe.

Habitat and ecology
A. humilis is a frequent aeronaut found in a variety of habitats including moss, grass, straw and litter. It is sometimes found in coastal seaweed litter and in the filter beds of sewage works. Adults occur at all seasons.

Adult Season Data (based on 279 records with adult season information)

Recorded substrate and hydrology for locations with Araeoncus humilis