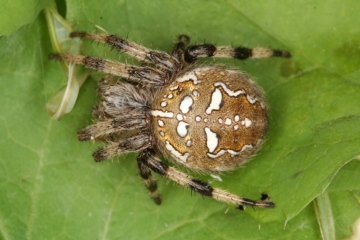 Distribution
The species is widespread but patchily distributed throughout Britain. It is widespread in western and central Europe.

Habitat and ecology
The spider is found on vegetation which has sufficient height and strength to support the large orb web, such as undisturbed grassland, heather and gorse. There may be a preference for damper situations. The web is usually found stretched across the gap between plants, with a large tent-like retreat at one side, where the spider can be found if not in the centre of the web. This very variably-coloured spider holds the British weight record. Adults are found in late summer and autumn, with a male peak in August and female peak between August and October.

Status
Locally common, although Crocker & Daws (1996) suggest that it may be declining. This may be due to loss of suitable habitat.

Adult Season Data (based on 1462 records with adult season information)

Recorded substrate and hydrology for locations with Araneus quadratus

Araneus quadratus female on outside of retreat