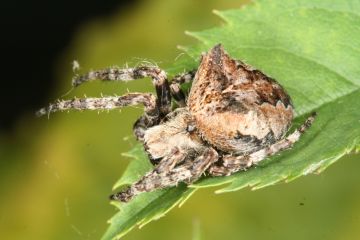 Distribution
Largely confined to the southern coastal counties of England, seldom occurring more than 30 miles from the south coast, though further inland in Surrey it was present in some numbers in 1985 at Great Oaks, Claygate and was again found in that county in 2001. There is also a recent record from South Wales. It is widespread in western and central Europe, but the species is included on the Red List for Sweden (Gardenfors 2000) and has not been recorded from Ireland.

Habitat and ecology
Deciduous woodland and scrub. The spider is mainly found in or at the edge of broad-leaved woodland, occasionally being recorded from pine. It has also been found in scrub on maritime heath. The spider's orb web is sometimes spun high up in trees and can have a very long frame thread. Males and females are adult in June, the females remaining mature through to September.

Status
The species is infrequently found and very local, though there have been several new records.

Threats
The loss of semi-natural woodland to intensive forestry practice may reduce the potential habitat for A. angulatus. An additional threat to this species in particular is the pressure on land for development and tourism in its main range along the south coast.

Management and conservation
It has been recorded from woodland edge and, by actively maintaining this feature within existing woodland glades and rides, suitable habitats for this species could be increased. Climate change may favour this species.

Adult Season Data (based on 90 records with adult season information)

Recorded substrate and hydrology for locations with Araneus angulatus

A angulatus in garden