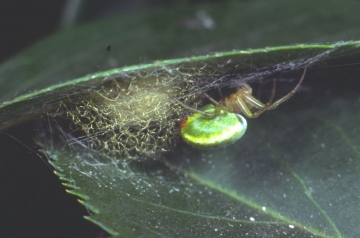 Distribution
The species is widely distributed in Britain, becoming more scattered in the west and north. It is widespread in north-western and central Europe.

Habitat and ecology
The spider is found in a wide variety of situations, but most commonly on trees (particularly oaks) and bushes in woodland, scrub and hedgerows, as well as on nearby low vegetation. It occurs in similar habitats to A. opisthographa, with which it is often, but not always, found. Adults of both sexes have been recorded between May and July, with a peak in June. Females have occasionally persisted as late as September.

Status
The species is common in England and Wales but a little less so in Scotland.

Adult Season Data (based on 2327 records with adult season information)