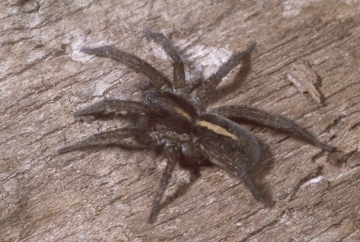 Distribution
The species is confined to saltmarshes in the South and East of England. It has been found around the Solent and Langstone Harbour on the south coast, from the coasts of north Kent, Essex and Suffolk, with an old and recent record from Scolt Head, Norfolk and recently on a tidal stretch of the River Taw in North Devon. For such a large spider it is easily overlooked due to its specialised habitat and nature. It has been recorded regularly near Faversham in north Kent, and was found to be fairly numerous at the Blythburgh Estuary in Suffolk. Although Cooke (1961) reported considerable numbers at Colne Point and the marshes bordering the Stour Estuary at Wrabness, it was not found again at Colne Point despite extensive searches until a survey undertaken in 2004, although it has also been found in Essex at Haven Point near Foulness and Skippers Island in Hamford Water. Elsewhere in Europe it has been recorded from France, Spain, Portugal, Italy and Corsica.

Habitat and ecology
Saltmarsh and seasonally wet saline areas. A. fulvolineata is found under debris and stones at the top of saltmarshes, under lumps of mud and wet, tightly matted debris along the foot of the sea wall and under stones on the wet mud on the nearby marshes. It has also been found in cracks in the upper saltmarsh where saltpans had dried out and were unvegetated, and on pure shingle at Havergate Island. At Foulness it was found in numbers running on bare mud in saltmarsh and also in a brackish area on the shelf between the sea wall and borrowdyke. The species appears to have very specific habitat requirements and these specific requirements are not at all common even where otherwise apparently suitable habitat abounds. Neither are the spiders specific requirements stable, so in many locations areas may change and become unsuitable relatively quickly. Adults of both sexes are found mainly from April to June, but also in September. Possibly some individuals mature in the autumn and over-winter, as in many other large lycosids.

Threats
In the construction and maintenance of sea defences, the strip of land immediately in front of the sea wall is very vulnerable to being covered with spoil or at best severely disturbed. The spider's adoption of this habitat at Colne Point would suggest that the sea wall has caused a seaward contraction of its horizontal range on the shore. There has been extensive work to raise sea wall defences at this and other parts of coastal Essex, and suitable habitat for this spider may have been lost. Sea level rise and coastal defence improvement are likely to increasingly threaten this and other coastal species.

Management and conservation
Ensure survival of suitable saltmarsh habitats by protecting upper saltmarsh zone from damage during construction of coastal defences. In the event of loss of saltmarsh due to rising sea levels, create new habitat by managed realignment of coast.

Recorded substrate and hydrology for locations with Arctosa fulvolineata