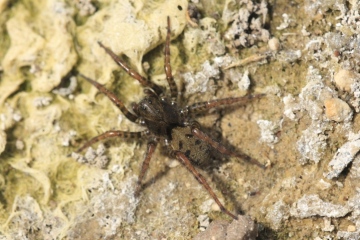 Distribution
The species is widespread in Wales and on southern heathland, but very scattered elsewhere and absent from much of central and northern Britain. It is widespread in north-western and central Europe.

Habitat and ecology
This spider can be found in a variety of situations, including wet heathland, dune slacks, fenland and other wet marshy places. There appears to be an association with seasonally wet habitats. Unlike A. perita, this spider does not seem to build a burrow, seeming to be content with a silken cell constructed amongst litter or vegetation. Merrett (1968) found this spider to be adult between May and October with an ill-defined peak of male activity in June. Our data show adults of both sexes have mostly been collected between the end of April and July, females occasionally later.

Adult Season Data (based on 623 records with adult season information)

Recorded substrate and hydrology for locations with Arctosa leopardus