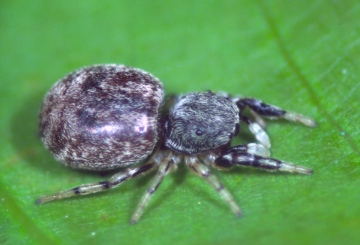 Distribution
The species is widespread in south-eastern England, but otherwise has a scattered distribution across southern England and Wales, being recorded as far north as Leicestershire and North Wales, with old records for Durham. It is widespread in western and central Europe, but has not been recorded from Ireland.

Habitat and ecology
Woodland and scrub. B. chalybeius favours a woodland habitat where it spins a retreat on the upper surface of leaves of bushes and young trees, particularly oak. Adults are found mainly from late spring to mid-summer.

Status
Recorded from 73 hectads since 1992, showing a clear increase in records in recent years.

Threats
There is a general threat to spiders of broad-leaved woodland from loss of habitat due to urban and agricultural development.

Adult Season Data (based on 365 records with adult season information)