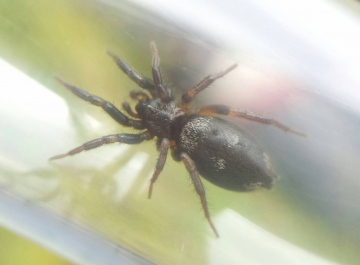 Distribution
C. nocturna has been recorded from only three sites in Britain: at Prawle Point and Signalmans Point in south Devon, at Tennyson Down on the Isle of Wight, and more recently in Pembrokeshire, southwest Wales. It is widespread in Europe being recorded from as far north as Scandinavia.

Habitat and ecology
Coastal grassland and cliffs. In Britain it has been recorded running over sandy banks, rocks and exposed chalk, all on sea cliffs. This diurnal species appears to require bare ground with a sunny microclimate and may be associated with ants. On the continent this species is associated with coniferous woodlands, where it is often found under stones. Adults have been found in May and June.

Status
Recorded from only three sites, though no sign of any decline. The exposed bare ground required by the spider at these sites is threatened by scrub encroachment.

Threats
The growth of scrub may shade the exposed sandy banks or rocks on which this species has been found.

Management and conservation
Prevent the encroachment of scrub around south facing sandy banks and rocks at the known sites.

Recorded substrate and hydrology for locations with Callilepis nocturna