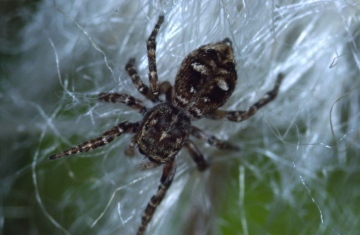 Distribution
The species is well-established at four sites in the Delamere Forest area, and it has been found more recently at Wybunbury Moss. In addition to these Cheshire sites, it was discovered in 1981 in a marsh by Loch Ken near New Galloway, Kirkcudbrightshire, and has since been found several times in this area and at Loch Stroan a few miles away. It has also been found in Shropshire and Denbighshire (Merrett 1995a) in the same habitat type. This species is fairly widespread in Europe.

Habitat and ecology
In the Delamere area it has been found in bogs on Sphagnum, and at Wybunbury Moss in two fen meadows and in an area of abundant Eriophorum vaginatum in the Sphagnum bog. It spins a cocoon in tall vegetation such as seed heads of Eriophorum and flower heads of Lychnis flos-cuculi and Cirsium palustre. It over-winters deep in the Sphagnum. In the Scottish sites it also occurs on Deschampsia cespitosa at the side of the loch and in drier areas in dead leaves lying in the grass. Adults are found from March to September.

Status
This spider may be abundant at its known sites but in very restricted habitat areas. It has to be specifically searched for, which may have resulted in some under-recording in the past.

Threats
Wybunbury Moss suffered severe eutrophication for many years prior to 1986 owing to pollution from a septic tank and road drainage. Agricultural run-off still threatens further damage of this sort. The eutrophication has caused marked changes in the vegetation, with loss of Sphagnum lawn. There has been further loss of Sphagnum owing to birch and pine invasion. Woodland encroachment is also a problem at Abbots Moss, Delamere Forest.

Management and conservation
In 1989 S. floricola was found in an area of Wybunbury Moss where tree cover had recently been removed, resulting in a good growth of Sphagnum and Eriophorum. This suggests tree removal is an effective means of restoring the habitat where there has been birch and pine invasion.