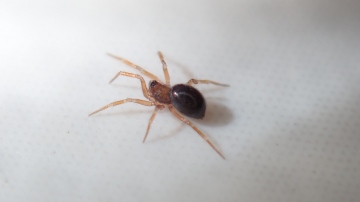 Distribution
The species is widespread throughout most of Britain. It is found in Europe and the Faeroes (Holm 1980) and is fairly widespread in north-western and central Europe.

Habitat and ecology
The species has been recorded in detritus in broad-leaved, mixed and coniferous woodland, in heathland, moorland and grassland, and at an altitude of 2400' (732 m) in the Snowdonia National Park (Goodier 1970a). Curiously, of the three habitats investigated at Wybunbury Moss, the species was recorded from the Sphagnum lawn but not from the pine and fen woodland, or the wet grassland (Felton & Judd 1997). Adults have been recorded throughout the year, but mostly in autumn, winter and spring, with females until mid-summer.

Adult Season Data (based on 1710 records with adult season information)