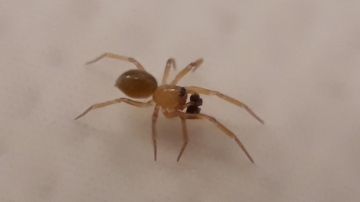 Distribution
The species is confined to the south of England, mainly the counties of Dorset, Hampshire, Surrey and Essex. It is uncommon in Europe and has not been recorded from Ireland or Scandinavia.

Habitat and ecology
C. serratus occurs in litter and moss under pine, beech and oak, and in moss on chalk grassland and acid grassland. It is probably most abundant in deep beech litter. Both sexes are adult from November to March, females also in April.

Threats
The loss of old beech woods. This species has been found in litter in pine plantations, but under pine is more often in clumps of moss mixed with litter than in pure pine litter, and therefore is usually more frequent in semi-natural woodland.

Management and conservation
Maintain old beech woods with deep litter layer, and areas of old pine with associated moss and heather on heathland.

Adult Season Data (based on 46 records with adult season information)

Recorded substrate and hydrology for locations with Centromerus serratus