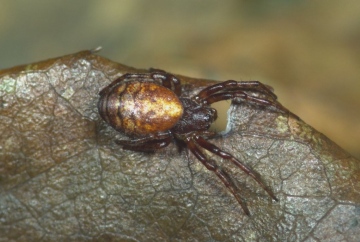 Habitat and ecology
The species occurs mainly on heathland and calcareous grassland, perhaps preferring habitats with sparse vegetation. The orb webs of this spider lack the silken retreat and signal line typical of the family Araneidae. They are constructed in vegetation near to ground level and any disturbance may cause the spider to drop into the litter layer. Males are adult from spring to autumn. Adult females may be present all year.

Status
Recorded in 58 hectads since 1992, but showing an apparent decline of 46% in hectads with spider records both before and after that date (81 to 43), so a Watching Brief should be kept on this species. Generally uncommon.

Threats
Loss of heathland and calcareous grassland to agriculture and urban development are likely to the most important threats to this species.

Management and conservation
Prevent further loss of heathland and calcareous grassland in areas where it occurs.

Adult Season Data (based on 149 records with adult season information)

Recorded substrate and hydrology for locations with Cercidia prominens