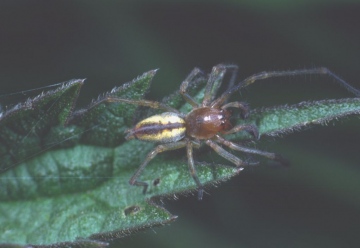 Distribution
The species is widespread south of the Wash, but is more scattered in the west and in the north as far as central Scotland. It is widespread in western and central Europe.

Habitat and ecology
The spider occurs on low plants in rough vegetation and heather. It is most easily found in early summer by looking for the retreat constructed from two or three leaves, or grass heads, stitched together to make a retreat which will hold the female and egg-sac. Later in the year, immature specimens, which already show the reddish median stripe on the abdomen, can be found in small silk cells on plant stems such as dried docks. Adult males are found mainly in late spring and early summer, females from late spring to the autumn.

Adult Season Data (based on 603 records with adult season information)

Recorded substrate and hydrology for locations with Cheiracanthium erraticum