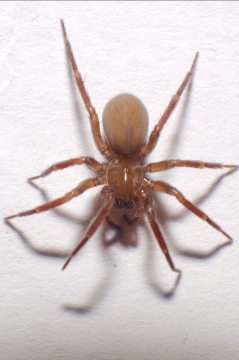 Habitat and ecology
The species is often found in dark, damp situations such as woodland litter and in caves, drains and cellars where the spider spins a sheet web with a small retreat. Smith (1989) notes all recent records in Yorkshire refer to those parts of the county where chalk or magnesian limestone is the basic geological formation. Females have been found under stones in disused quarries, railway cuttings, etc. and numerous males have been taken in pitfall traps set in chalk grassland on steep, well-drained hillsides. Crocker & Daws (1996) also give some records from more open habitats and note a possible link with calcareous sites in Leicestershire. A similar association with calcareous sites occurs in Dorset. The spider has also been found in fairly open conditions on exposed chalk on the South Downs. However, in Bedfordshire pitfalls in well-drained acid grassland have turned up this species, while in Cambridgeshire good numbers have been trapped in winter on heavy clay in arable fields. Both sexes have been found from the autumn through the winter to spring, females occasionally persisting into the summer.

Threats
Given the fairly wide range of different habitats it has been found in, the nature of any threats is difficult to determine at present.

Adult Season Data (based on 118 records with adult season information)

Recorded substrate and hydrology for locations with Cicurina cicur