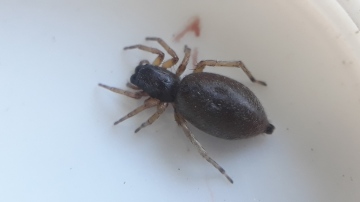 Distribution
The species is widespread in England from Yorkshire southwards, but scattered in the south-west, northern England, Wales and as far north as central Scotland. It is widespread in western and central Europe.

Habitat and ecology
An abundant spider associated with bushes and trees where it lives under bark and within the canopy. Immatures have been found in the field layer in autumn which suggests migration to the canopy during later instars and a biennial life cycle (Toft 1978). Females attach their white egg-sacs to leaves and other vegetation which are normally guarded. Adults of both sexes are found mainly early to mid-summer with a peak in June, females occasionally throughout the year. Males and females have been found from April to November in Leicestershire with activity peaks in June (Crocker & Daws 1996), whereas in Huntingdonshire and Denmark activity peaks in September to October (Duffey 1969; Toft 1978).

Adult Season Data (based on 961 records with adult season information)

Recorded substrate and hydrology for locations with Clubiona brevipes