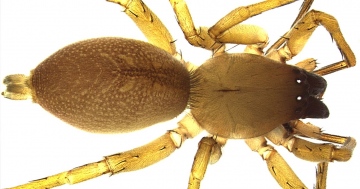 Habitat and ecology
Clubiona lutescens is found in a wide variety of habitats, including woodlands, grasslands, marshes and waterside vegetation, gardens, allotments, waste places and stony seashores. It has been taken from under stones and in moss and litter, by sweeping field layer vegetation, and by beating trees and shrubs (Crocker & Daws 1996). In rank vegetation the female forms a silk retreat by folding over and fastening leaves, where she hides with her egg-sac. Adults of both sexes are found mainly in May and June, females occasionally throughout the year and males from May to September.

Status
Common in most of Britain.

Adult Season Data (based on 1330 records with adult season information)

Recorded substrate and hydrology for locations with Clubiona lutescens