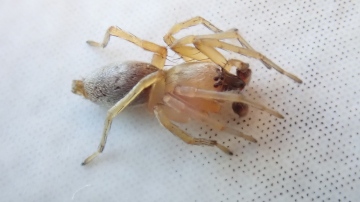 Distribution
The species has a patchy but widespread Distribution: in Britain as far north as East Ross, but is very scattered in much of the country. C. pseudoneglecta was recently recognised as a species distinct from C. neglecta (Wunderlich 1994), and has been collected in Scilly, Kent and the Channel Islands (Merrett 2001). The map shows all records of C. neglecta submitted to the recording scheme, and few are likely to be referable to C. pseudoneglecta.

Habitat and ecology
C neglecta is typical of sparsely vegetated open habitats, including short grassland, sand dunes, wasteland, old quarries and brick pits, open scrub and scattered young trees. Specimens are found mainly in the ground layer and under stones, but some have been taken by beating scrub and young trees or sweeping the field layer (Crocker & Daws 1996). Adults of both sexes are found mainly in early to mid-summer, females occasionally into the autumn and winter.

Adult Season Data (based on 499 records with adult season information)

Clubiona neglecta sens. str. male
please log on and upload a new image for this species