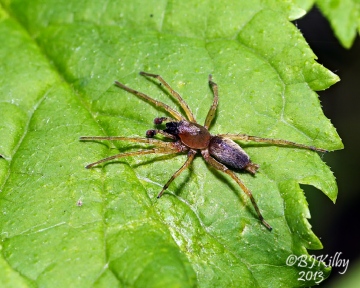 Habitat and ecology
The spider can be found amongst low vegetation and detritus in a wide range of habitats, most often in damp or marshy situations, but also scrub grassland, nettle beds, rubbish tips and heathland. The female can often be found with her eggs in a retreat constructed in a curled leaf held with silk. Adults of both sexes are found mainly in late spring to mid-summer, females occasionally persisting into the autumn and winter.

Adult Season Data (based on 2678 records with adult season information)