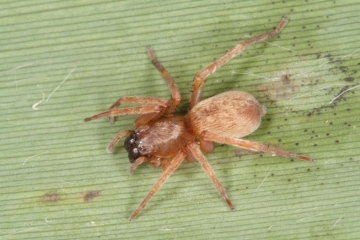 Distribution
Only known from two sites in Britain: Chippenham Fen, Cambridgeshire - the type locality - where it has been recorded on a number of occasions since it was first found there in 1951; and a single female found in a water trap at Botany Bay, Lakenheath Fen RSPB reserve, Suffolk in April 2000. The record from Tuddenham Fen, West Suffolk mapped in the Provisional Atlas is now known to be erroneous. In Europe it is recorded from only a few countries, including the Netherlands and Poland.

Habitat and ecology
Confined to fens where it is found among cut sedge and reeds and in sedge tussocks. Adults have been collected in every month between February and October, except March and August, suggesting an extended period of adult activity.

Status
UK Biodiversity Action Plan priority species. Known from two sites, one the type locality, where it has been recorded on a number of occasions, and at the other just one specimen has been found. The population at Chippenham Fen appears to be established but dedicated survey work between 2002 and 2005 failed to refind it there or at Lakenheath Fen

Threats
Chippenham Fen is a National Nature Reserve, and Lakenheath Fen an RSPB reserve. In its principal site at Chippenham Fen, water abstraction in the surrounding area is thought to have reduced water levels in the fen.

Management and conservation
Management at Chippenham Fen is aimed at maintaining a high ground water table and preventing carr woodland encroaching on open sedge beds by a regime of annual mowing and grazing. Grazing has also been reintroduced to Botany Bay by the RSPB, and water levels are controlled to keep the site wet. Further survey work is needed to establish the continued presence of this species at these two sites, and to discover new sites, and then to carry out research on its ecology to enable best management practice to benefit the species.