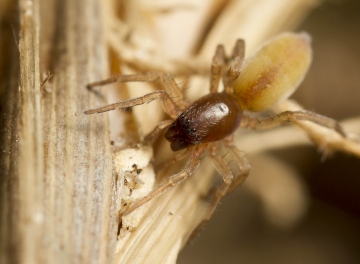 Distribution
The species is widespread in East Anglia, near the coast in Wales and south-eastern England, and on southern heathlands, but records elsewhere are very scattered, to as far north as the South Ebudes.

Habitat and ecology
A wetland species of fens, bogs, wet meadows and coastal habitats such as Phragmites dykes, saltmarsh edge and tidal litter, which paradoxically also occurs in sand dunes. Little is known of the ecology of this species. Adults of both sexes have been recorded almost throughout the year, but mainly in spring/early summer and the autumn.

Status
Local, but the spider may be frequent in wet habitats, especially fens and marshes in the south.

Adult Season Data (based on 756 records with adult season information)

Recorded substrate and hydrology for locations with Clubiona subtilis