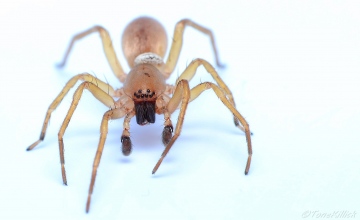 Habitat and ecology
This widespread species is found in a large number of situations, usually at ground level, particularly in leaf litter and detritus, occasionally indoors and around houses, in the garden, on shrubs and low vegetation, trees, sometimes under loose bark and under stones. The dampness of the habitat can range from the dryness of heath to the extreme dampness of marshes. Adults of both sexes may be found throughout the year, with peaks from late spring to mid-summer and in the autumn.

Adult Season Data (based on 1983 records with adult season information)

Recorded substrate and hydrology for locations with Clubiona terrestris