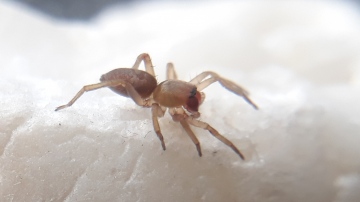 Distribution
The species has a widespread Distribution: in Britain north of a line between Glamorgan and the Humber but to the south it is very scattered except on moorland in south-western England and on southern heathlands. It is widespread in western and central Europe.

Habitat and ecology
C. trivialis is generally found amongst low vegetation such as heather and gorse, and sometimes under stones, but it has also been found on pines. It often occurs on high ground but has also been found at sea level. In the south the species mainly occurs on heathland. Adults have been found between March and December, with peaks in late spring/early summer and late summer/early autumn.

Status
The spider is very local in the south, but more frequent in the north.

Adult Season Data (based on 813 records with adult season information)

Recorded substrate and hydrology for locations with Clubiona trivialis