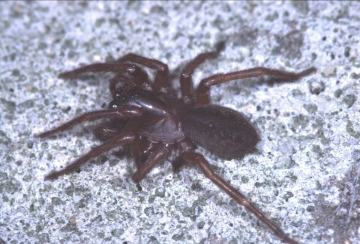 Distribution
The species is almost confined to south-east and south-central England, south of a line from the Severn to the Thames estuaries. Old records from Yorkshire and Berwickshire are doubtful and probably result from confusion with the much commoner C. atropos. C. terrestris is widespread in north-western and central Europe as far north as Denmark. It has not been recorded from Ireland.

Habitat and ecology
Woodland and scrub. C. terrestris occurs mainly in woodland, under fallen logs, among litter at the bases of trees, also sometimes in mossy banks, or mature heathland with some scrub. Males are adult in autumn and spring, females probably for most of the year. The eggs are laid in the female's silken tube. When the young hatch they feed on the mother's prey until early winter, when the mother dies and the young feed on her remains before dispersing in the spring.

Status
Widespread, but rather local and never abundant within its restricted range. No evidence of decline.

Threats
The loss of semi-natural woodland to intensive forestry, and the loss of mature heathland. The removal of fallen logs and dead wood.

Management and conservation
Retain fallen logs and dead wood in woodlands, and retain some areas of mature heathland scrub.

Recorded substrate and hydrology for locations with Coelotes terrestris