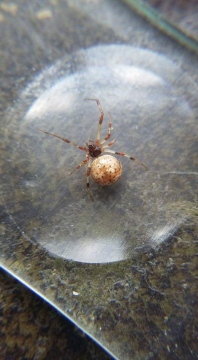 Distribution
A. riparia is largely confined to the south of England, East Anglia and South Wales. There are old records for Cumberland and Nottinghamshire which may be doubtful, but it has been recorded recently in Yorkshire and from several sites in Leicestershire. This species is widespread in north-western and central Europe, but very rare for example in the west of France (Asselin et al. 1990) and Norway.

Habitat and ecology
Mainly heathland, but also in woodland rides and at the margins of arable fields. The spider is found among roots on overhanging banks or beneath low vegetation, mainly on heathland but also along rides in commercial forests. It spins a web with long sticky threads that are fixed to the ground, where they catch crawling insects. Ants form a large proportion of the prey caught. A retreat is built at the top of the web, which consists of a long silken tube covered with debris. Males are adult between late May and July, females from May to September.

Status
The species appears to have undergone major decline, but it needs to be specifically searched for in its specialised habitats. It has been found at 10 locations since 1992 and the number of hectads with records has fallen from 23 before 1992 to 9 after that date, equivalent to a decline of 61% in area of occupancy. It is generally rare, though may be fairly numerous where it occurs.

Threats
The loss of sandy banks.

Recorded substrate and hydrology for locations with Cryptachaea riparia