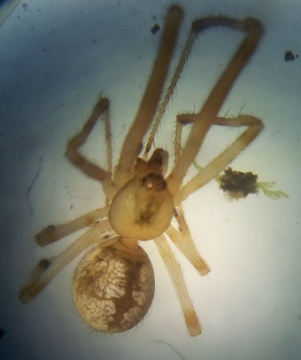 Distribution - single specimens have been found at a few isolated sites in the south of England, and colonies appear to have established in Cornwall, Devon and in the wildlife garden of the Natural History Museum.

Habitat and Ecology - A synanthropic species. The spider is found on man made structures and objects from ground level to no more than two feet high, in darker, shaded situations. They have been found underneath windowsills and piping on houses, on discarded waste and rubbish and also plastic garden furniture (including slides/playhouses). The female builds a typical theridiid scaffold web between anchor points and generally catches crawling insects including ants. The web becomes more extensive with long ground threads in more undisturbed locations where space allows. Towards the centre of the web the spider creates a retreat using detritus, which it sits underneath or behind rather than inside. Once the female lays eggs, the sacks are incorporated into the retreat and the spider can be very well camouflaged sitting against this structure. Males have been found in the webs with the females, usually at the periphery but sometimes on the retreat next to the female. Individuals have been found from March to October, with maturity occurring around May/June.

Status - An introduced and synanthropic species that appears to be establishing at least in the South West.