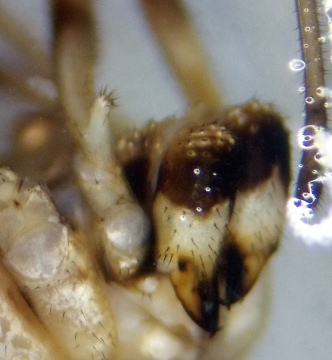 Identifying to species level
Dicranopalpus ramosus was recorded as a single species until a paper was published in 2015 which detailed another species of the same genus, Dicranopalpus caudatus (Wijnhoven and Prieto, 2015). Recording Dicranopalpus ramosus as sensu stricto rather than sensu lato therefore requires microscopic examination of a number of features detailed in this paper.

Distribution
Dicranopalpus ramosus was first introduced to Britain in the 1970s (Davidson, 2019). This common species has since been recorded all over the UK and is thought to have a wide distribution. As these records need to be accompanied by a specimen, further verified records are needed to determine the true distribution of this species compared to D. caudatus.

Habitat and ecology
This species is usually found in summer to early autumn and has been recorded in a variety of habitats, including urban areas, grassland and hedgerows. It is more arboreal than the newly introduced Dicranopalpus larvatus and shows a distinct posture when resting, with its legs stretched out to either side. Many observations are made of this resting posture on walls, fence posts, tree trunks and vegetation.

Status
The status and distribution of this species has yet to be confirmed due to lack of verified records. It is likely that many unconfirmed sensu lato records are this commoner species and not D. caudatus but further data is needed.

Adult Season Data (based on 31 records with adult season information)