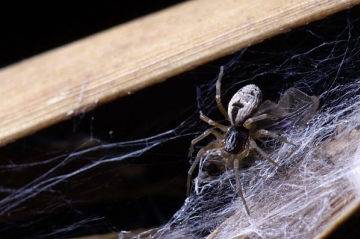 Distribution
Most recent records are from Scotland where the species is fairly widespread in the central eastern area. A few widely scattered records from England and Wales. A Palaearctic species, widely distributed in Europe but not recorded from Ireland and more frequent in the north of the region.

Habitat and ecology
D. pusilla is found on low, dry or dead vegetation where it spins an irregular retreat resembling that of Dictyna arundinacea. Frequent on heather, juniper and young pine in open areas of Abernethy Forest. It is mature in spring through to late summer.

Status
UK Biodiversity Action Plan priority species. Recorded from 13 hectads since 1992, but showing a decline of 48% in hectads with spider records both before and after that date (21 to 11). Generally very uncommon, but apparently increasingly confined to some areas of Scotland, where it may be locally abundant.

Threats
There is insufficient knowledge of the habitat and other ecological requirements of this species to ascertain specific threats.

Management and conservation
The restoration of native pine forest with open glades at Abernethy appears to suit this species.

Adult Season Data (based on 85 records with adult season information)

Recorded substrate and hydrology for locations with Dictyna pusilla